Spoty snake was a very adventurous space explorer. He knew that many astronauts had trips to planets and moon; but no one had a trip to the Sun, because Sun is very hot! But the bold Spoty wanted to go to the Sun.

Spoty invented a cool space exploration vehicle,  which would carry him all the way to the Sun. It was filled with cool air to keep his body cool during the space flight. It was made of glass so that he could watch the beautiful scenes of glowing galaxy. 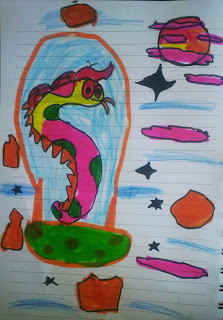 The vehicle was ready. He sat inside the vehicle and started his journey to the Sun. The vehicle took him quickly out the Earth. He could not believe his eyes! He saw a lot of sparkling stars in the galaxy.  He controlled the vehicle and tried not to hit the moving asteroids. The orange colored Sun grew bigger and bigger as he came close to it.

The Sun saw someone coming close to it in a small space vehicle. He asked “who is that?”

Spoty said “I’m a little space explorer from Earth. Can I come and meet you?”

“I’m happy to welcome my first guest!” Said the Sun.

“ Oh Sun, but will you burn me into ashes?” asked Spoty.

“Don’t worry, I’ll stop my blazes till you go back.” Said the Sun.

The Sun did not burn Spoty and his space vehicle at all. He roamed around the Sun for some time and returned to Earth in his space exploration vehicle.
Posted by Vrinda at 01:03